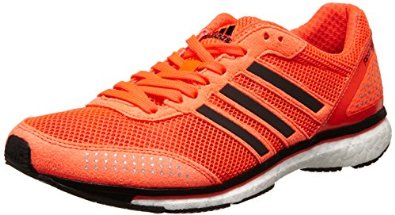 VERDICT : The Adidas Adizero Adios Boost 2.0 veritably provides nigh utter efficiency during running, but its shortcomings are not justified by its surcharge price. If the flaws of the Boost don’t matter to you and if you appreciated the Boost’s predecessor, the Adizero Boost 1, then include the Adidas Adizero Adios Boost 2.0 in your list of options. If not, then it would be best to look out for more selections out there. RATING: 7.6/10

Nowadays, running shoes have become trusted companions of runners and athletes around the world. Brands like Nike, Adidas, Under Armour, and more have been releasing waves of running shoes in varying sizes, shapes, appearances, and features. The Adidas Adizero Adios Boost 2.0 is one of them, debuting in 2014 with the title “the world’s fastest shoe.” The question is: does the Adidas Adizero Adios Boost 2.0 really live up to the designation it has been granted?

Its upper body is composed of spacer mesh and overlays made out of synthetic Tirrenina Suede. The shoe also boasts of its boost foam with hard EVA rim that makes up most of its midsole. Its outsole is composed of carbon rubber and Adidas Quickstrike under the forefoot.

At size 10.5 (size 10 in the United Kingdom), a half-pair weighs around 248 grams or 8.74 ounces. The Adidas Adizero Adios Boost 2.0 mainly comes in two colors, infra-red and black-runwhite, but there have been additional colors such as blue and hero ink ever since its release.

WHAT’S GOOD ABOUT IT?

Upon first wearing the shoes, one will automatically feel the rigidity and the strength of the materials of the Adidas Adizero Adios Boost 2.0. With an unyielding, robust forefoot and a responsive heel, the pair provides boosted speed and agility. Though the distinction of the Boost can barely be felt at lower speeds, the heels of the Boost are sustained at higher speeds, keeping one’s feet in proper momentum and preventing these from getting wobbly and disoriented.

The unlined spacer mesh that is provided in the Boost that works in tandem with Tirrenina Suede—a synthetic material—allows for potent ventilation for added comfort during workouts and tracks. In fact, most of the parts of the Boost are made out of the same mesh, affording more passages for air and heat to flow through.

Due to the utilization of specific, light materials, the Boost itself is light as well. Weighing at only 248 grams (at size 10.5), runners will appreciate the light delivery of the Boost during workouts and tracks.

One of the major design flaws of the Adidas Adizero Adios Boost 2.0 is the tongue component. Being short, its edges fold under when one attempts to pull it up for lacing. The coarser side slides through the skin when this happens, causing skin irritation. Although it may seem that this can be solved by reaching in and correcting the folds, there will always be a portion of folded tongue somewhere in there because of the long lacing. This is a major shortcoming during running because one can always feel a lump under the top of the tongue.

Above the Torsion Shank, the midsole waist is a narrow component of the Boost. The foam’s rim lining is stiff, causing the edge to mildly dent the arch of your feet. After running for a long period of time, one will be able to feel soreness in that area, though it is mostly nothing major.

Leveled at $140 (RSP) in the United States, it is no mistake that the Boost comes with a premium price tag.